After winning four Tony Awards and marrying Bob Fosse in 1960, Gwen Verdon took a break from performing to produce their daughter, Nicole Fosse, in 1963.


"Verdon resumed working alongside Fosse in the title role of Sweet Charity on Broadway three years after Nicole was born. That was their last collaboration as husband and wife.


'I was living like a wife and a mother, which was really what I wanted to be, but I was the wrong kind of wife for him,' Verdon told the New York Times in 1981. 'I think Bob outgrew me. Bob started writing and he was involved in all kinds of things, and I was so involved with Nicole I didn't really care if I worked or not.'" (source: The Oprah Magazine)

I have my doubts about Fosse outgrowing Verdon, as if he were superior to her. It seems more likely that she knew she couldn't continue to let her star fade as her husband f***ed their marriage away.

So she created the role of Charity Valentine in Sweet Charity, choreographed and directed by Fosse.


I'm sorry, but I don't know the year of this television appearance by Gwen Verdon and don't
know what show it was. Maybe the Tony Awards?

In 1969, Fosse directed and choreographed a movie for the first time. It was Sweet Charity, not starring Gwen Verdon. Her part went to Shirley MacLaine because the studio wanted a young, fresh face. Verdon taught MacLaine the steps and assisted Fosse with directing. 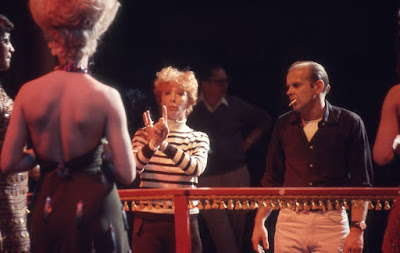 She received no credit, but in the end, maybe she didn't mind because the film flopped.

Fosse got another chance at directing a movie in 1972 with Cabaret. As usual, Verdon pitched in and did whatever was needed, although their married life was coming to an end. Fosse/Verdon portrays Verdon as begging Fosse to end his affair with the film's German translator because she's humiliated by it. She flies to the U.S. to get, of all things, the gorilla head that was used in the movie. She returns to their hotel room to find Fosse in bed with the translator. An article I read said that he was in bed with two women.

That was it. They never divorced. They continued to work together. Verdon stated in many interviews that Fosse made her into a better dancer. Fosse was quite dependent on Verdon to "help" him with his work. When he won The Best Director Academy Award, he thanked his friend, Gwen Verdon, among other people.

As Fosse/Verdon continues, Verdon goes after the rights to Chicago with a vengeance, telling Fosse over and over that if they can do the musical with her in the role of Roxie Hart, then Nicole will be "set for life." Fosse always responds that Nicole will be fine, Nicole is set, they don't have to do Chicago. He tells Verdon that she's too old to be an ingenue, but finally, they bring Chicago to the stage in 1976.

The show didn't start out as a huge success, but it certainly wasn't a failure. When Verdon needed surgery and had to take six weeks off, Fosse brought in Liza Minelli to play Verdon's part. People flocked to the show and didn't stop coming when Verdon returned.

Fosse did a couple more Broadway shows and directed a few movies––some successes, some failures. He and Verdon worked together on a revival of Sweet Charity in 1987. On the way to the premiere, he had a heart attack and died in Verdon's arms.

Fosse and dancer Ann Reinking were partners from 1972 to 1978. She played Katie Jagger, the character based on herself, in Fosse's 1980 autobiographical film, All That Jazz. Leland Palmer played "Audrey Paris," the Gwen character. In her only film, Erzsébet Földi plays daughter Michelle. Roy Scheider had the Fosse role of Joe Gideon. All That Jazz has more than one great number, but I'm going with this one because it includes the three female leads.