It's time for our annual (I call it annual but I might have skipped the last year or two; I can't remember) post recalling Saturday's Trooping The Colour,  the official celebration of Queen Elizabeth's birthday. This commemoration of her birth is always held in June, although Her Majesty was born in April.

However, we had a little problem this year. The Queen was traumatized by her visit from Donald Trump and it was difficult to get the lovely old lady out of the palace. She was afraid he hadn't really left and would start that crap again . . . you know, how he tries to claim the throne. What if he grabbed her pu . . . never mind started mouthing off again and saying that she was born nowhere near Great Britain and had to produce her birth certificate and then kept saying it wasn't a real birth certificate? She's already damned sick and tired of that shit.

The entire family chided Her Majesty for inviting the Trumps to dinner. Here, she tells Kate, BUT I DIDN'T INVITE HIM! I LEARNED HE'D BE HERE WHEN I READ IT ON FACEBOOK! 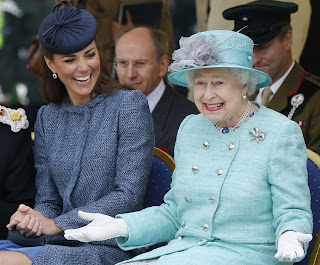 Then she came up with a great idea: Send Prince Philip to pick up Donald at the airport because Philip is the best driver in aaaaallllll of England. 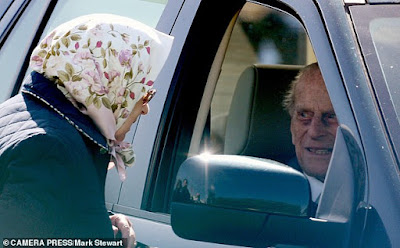 Unfortunately, Philip forgot his task and the Trumps arrived safely, so the next step in her plan was to give Donald a book––an obvious bit of sarcasm since the man can't doesn't read. But he didn't take the hint and leave, so everyone had dinner together. Her Majesty couldn't stop thinking about how nice President Obama looked in his tuxedo when he visited, while Donald's tux obviously came from a rental shop at the last minute and didn't quite fit. 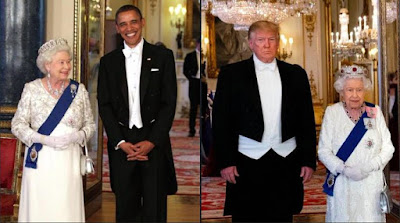 Princess Charlotte and Prince Louis were upset, too. Here they are at the window of the palace. The looks on their sweet little faces tell the whole story: PLEASE LET US OUT! 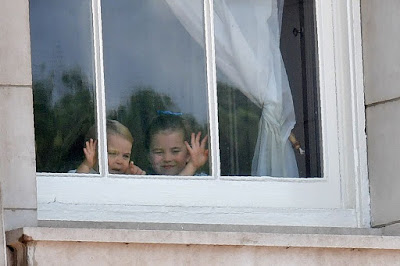 You can't see it in the photo of Charlotte and Louis, but this is what was behind them: 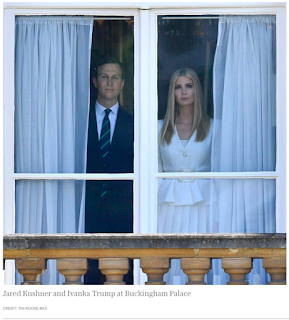 Can you blame them for being frightened? 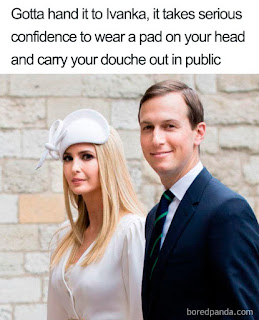 The Queen felt pretty nervous after hosting the Trump family, and who can blame her? No one can do anything if The Donald walks into Buckingham Palace and kills her or grabs her pus . . . never mind that last part. We know it's true because he said he can commit murder on Fifth Avenue and get away with it and he said he can grab certain female body parts, and the true King of England never lies. 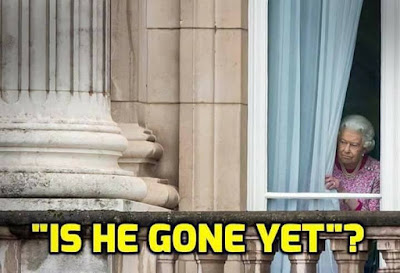 When every single footman and everyone in the family assured her that the Trumps were gone, AND she saw it on Facebook, she agreed to come out for Trooping The Colour. As always, the celebration included a lovely parade. 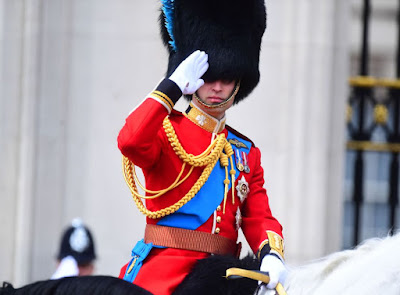 Beatrice and Eugenie, or Eugenie and Beatrice, were there. It's never too late for braces, girls. 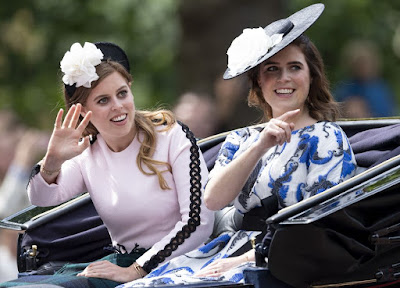 Here are Prince Edward and his wife, Sophie. Edward looks pretty darn full of himself because someone told him he could wear his special hat that turns into a helicopter (he's the one they keep in a shed in the backyard). 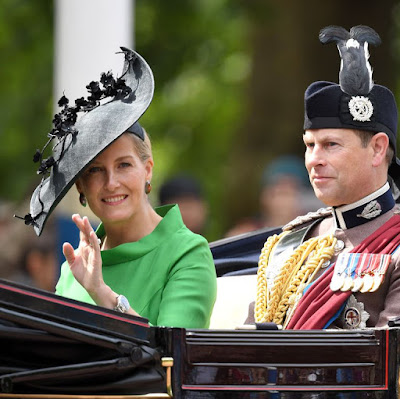 Then along came Kate, Camilla, and Meghan. Kate and Camilla raised their hands when they were asked, What is 2 + 2? 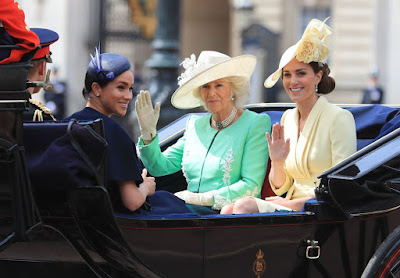 Well, the joke was on the Duchess of Wessex and the Duchess of Cambridge because they said the answer is 3, which is what William, Kate, and Harry were before Meghan came along. Now all the ladies are humiliated, but Harry stared straight ahead and pretended he didn't hear the question. After hours of parading, it was time for the balcony scene. Wait a minute! Harry and Meghan are kind of squished in there behind Prince Andrew, but I don't see Baby Archie. 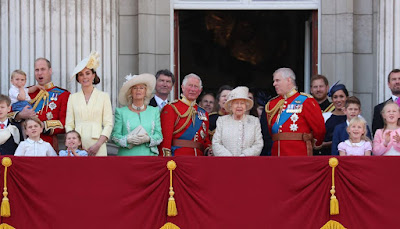 Oops! I guess it will be a long time before we see Archie again. If ever. No wonder Meghan held onto her belly while she was pregnant. 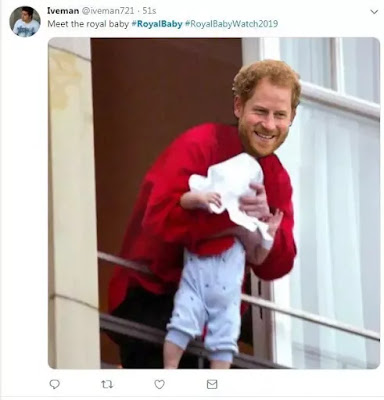 According to all the reliable click bait sources, everyone in the royal family does nothing but feud with each other. Here, they look up to avoid looking at each other. Only Kate is weirded out enough to look at Louis. She's afraid his head might fall off and that would create quite the mess. 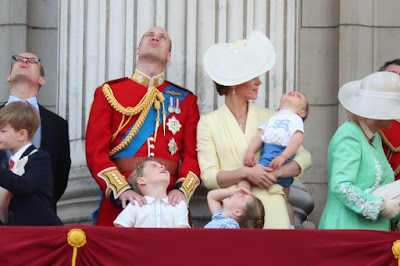 A few minutes later, Camilla was peeved when Louis damn near slapped her in the face, but we know it's something that everyone has wanted to do for years. Prince William had to hold back his laughter. 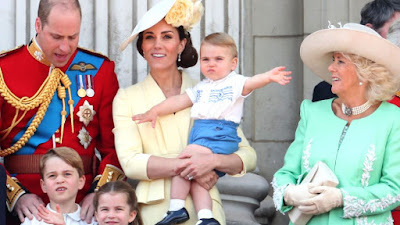 Prince George let the world know that it's time to end Trooping The Colour for 2019, 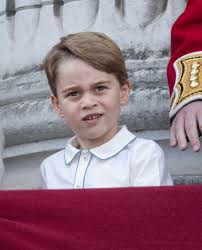 so let's bring this celebration to a close by saying 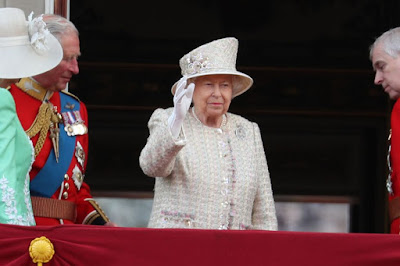 Happy Official 93rd Birthday, Your Majesty. You are older than dirt, but you look a lot better. (Watch out for Charles. He's pretending to be your right-hand man, but he really wants your job. For him to get it, you have to die.) 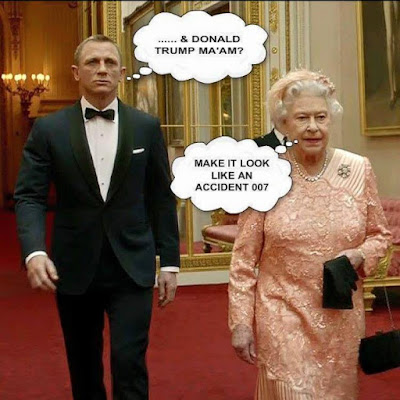