A BRIEF HISTORY OF SIMON & GARFUNKEL

Now that we're finished with the silly distraction of the potential job, we can get back to what's really important: Battle of the Bands.

As you may already know, the song for my current battle is The Only Living Boy In New York. The contenders are Simon & Garfunkel and PigPen Theatre Co. If you haven't voted yet, please visit THIS POST to do so.

The history of Paul Simon and Art Garfunkel can be summed up as making beautiful music together, splitting up, taking verbal jabs at one another, reuniting, splitting, not speaking, and reuniting.

The duo discovered they could harmonize in 1953 when they were in the sixth grade in Queens. They continued to sing together as high school students. In 1957, they recorded a composition of their own called Hey, Schoolgirl as Tom & Jerry. It was a modest success, and they appeared on American Bandstand. 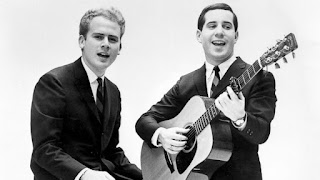 Their next attempts at recording together failed. College beckoned. Simon majored in English and went to Brooklyn Law School. Garfunkel studied art history at Columbia University and then earned a master's degree in mathematics. Both made attempts at solo singing careers, with Simon spending some time in England. When he returned to the U.S., the two recorded some songs together again, but weren't successful. One of these was The Sound of Silence.

Then a remix of The Sound of Silence hit in 1965––and it hit big. No more stage names. They were Simon & Garfunkel, folk rock duo. In 1966, they had three successful albums that produced four big singles. They became one of the most popular groups in the world during the remainder of the decade, but both wanted to make some changes. Paul Simon wanted to become a solo recording artist, while Art Garfunkel embarked on an acting career in movies. Both have said they only wanted to take a break from each other for a couple of years. The break became more or less permanent (in spite of some television appearances and their hugely successful free concert in Central Park in 1982) when an album that they were to record together instead turned into a Paul Simon solo project.

Creative differences? Sick of each other? Hurt feelings? All probably apply to the end of their recording career.

In 1990 when they were inducted into the Rock and Roll Hall of Fame, Garfunkel thanked Simon for "enriching his life." Simon's response was "Well, Arthur and I agree about almost nothing, but it´s true: I have enriched his life quite a bit now that I think about it."

Garfunkel has referred to Simon's short stature over the years in disparaging terms and said that he spoke to Simon in high school because he felt sorry for him.

From 1993 to 2003, Simon and Garfunkel rarely spoke. In 2001, Simon was inducted into the Rock and Roll Hall of Fame as a solo artist. In his acceptance speech, he stated, "I regret the ending of our friendship. I hope that some day before we die we will make peace with each other [long pause]. No rush."

Yet in 2003 they began to perform together again and have toured regularly, although Simon insists he'll never record with Garfunkel again. Garfunkel has also experienced problems with his vocal chords that have sometimes limited his ability to sing. They are 76 years old. 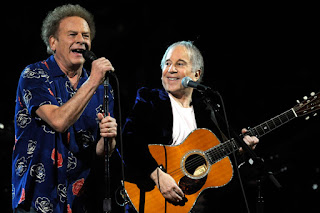 They have 10 Grammy Awards. Their last studio album, Bridge Over Troubled Water, was released in January, 1970, and became the best-selling album of all time until Michael Jackson released Thriller in 1982.

In my next post, we'll talk about the lyrics for The Only Living Boy In New York.