WHAT HAPPENED TO MICHAEL AND ROBERT ROSENBERG?

If you want to read my posts for this week in sequence, please start with BATTLE OF THE BANDS: STRANGE FRUIT. The contenders are Nina Simone and Billie Holiday. You have until midnight on Friday, October 20th, to vote. I'll announce the winner on Saturday, the 21st.

My posts that expand on information about Strange Fruit are the following (in order):

Today we finally get to the connection between Julius and Ethel Rosenberg and Abel Meeropol, who wrote Strange Fruit.

Michael and Robert Rosenberg, known as Robbie, went through hell when their parents were arrested, tried, and executed. Michael, who was ten at the time of the execution, remembers their parents better than Robbie, who was only six.

Here the boys are escorted by their grandmother to visit their parents in prison a few days before the execution: 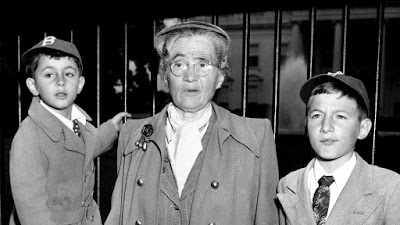 Although the boys spent some time with each of their grandmothers, no relatives wanted to keep them. Everyone was afraid to be associated with the convicted criminals. Michael himself recalls denying that he had any association with his parents.

They ended up in an orphanage, where they were abused.

Their parents' will named one of their lawyers, Emanuel Bloch, as the boys' guardian. Bloch found a home for the two with none other than Abel and Anne Meeropol, who had never met the Rosenbergs but were sympathetic to their cause.

Abel and Anne adopted the boys, who are still known as Michael and Robert Meeropol.

Here are Michael and Robbie with Abel Meerepol: 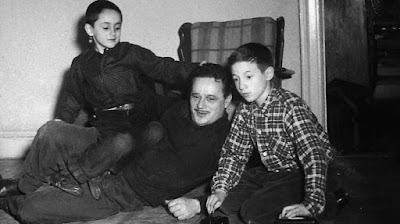 The two credit the Meeropols with saving their lives. Both grew up to have their own families, successful careers, and to acknowledge their identities as the sons of Julius and Ethel Rosenberg.

In fact, for many years they fought to clear their father's name. As more information became available to them, they accepted his guilt, but continue to believe that what he provided to the Soviets was useless.

They asked President Obama to exonerate their mother before he left office, which he did not do. They are ardent believers in their mother's innocence. She was convicted because of her own brother's false testimony.

When he consented to an interview with 60 Minutes in 2001, David Greenglass stated: "I would not sacrifice my wife and my children for my sister. How do you like that?" He still insisted on having his face and voice disguised.

Thanks to all of you who have followed this series of posts that began with the song Strange Fruit.

If you'd like to read more about Michael and Robert Meeropol, I suggest https://www.cbsnews.com/news/60-minutes-brothers-rosenberg-cold-war-spying-2/, where you can read the transcript of their interview with Anderson Cooper on 60 Minutes. I also recommend Ivy Meeropol's documentary, Heir To An Execution. Ivy is Michael's daughter. The documentary is available on HBO Now, can be purchased from Amazon, or is available on DVD from Netflix.