THE CEPHALOPOD COFFEEHOUSE: MOMMY TRIED TO KILL ME BY SUZY SORO 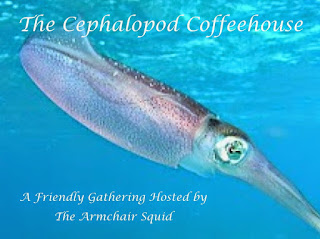 Welcome one and all to the Cephalopod Coffeehouse, a cozy gathering of book lovers, meeting to discuss their thoughts regarding the works they enjoyed most over the previous month.  Pull up a chair, order your cappuccino and join in the fun. This blog hop is hosted by The Armchair Squid. Click on the link to sign up and join us.

The best book that I finished this month is Mommy Tried To Kill Me: Why It's Never Too Early To Start Drinking In Paris by Suzy Soro.

Suzy Soro is my favorite celebrity I've "met" online (she's also the only one who has ever responded to my emails or to tweets in which I mention her). She's hilarious, and I wish she still blogged. When I learned she had a new book out, I bought it immediately. 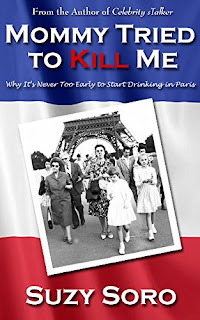 Suzy and her sister Lindy spent parts of their childhood living in France with their mother, who had gotten divorced from their father after twenty-nine years of marriage, and later married a Frenchman named Jean. But now little Suzy and Lindy are all grown up, and their mother is not running around Paris with Jean (thank God because he's dead). But she has become a lady of elderly or at least older status, who can still pull what Suzy and Lindy call "The French-Face: an eye roll up to the left, an almost imperceptible shake of the head, and a contemptuous, dismissive shrug. I'm a standup comic: I can recognize signs of contempt from space."

So the older lady who can French-Face with the best of them is eighty-nine, refuses to live in the United States so she can be near Suzy and Lindy, she's fallen in her Paris home and she doesn't have one of those buttons to push to say I've fallen and I can't get up (let me clue you in on something: those buttons are worthless because when I worked in the nursing home, we played host to a load of people who had fallen and couldn't get up and they had the button but couldn't remember how to push it or maybe their thumbs got cut off when they fell), so someone scooped her up and took her to the hospital. Suzy and Lindy travel to Paris to see their mother, and Suzy stays on to clean out the apartment her mother has decided to sell and to help darling French-Face Mommy recover.

This book is Suzy's memoir about her stay in Paris, doing the best she can to assist someone who does not want her assistance, and whose every conversation with Suzy "invariable devolves into what I'm doing wrong with my life, like how I never got a real job. And don't have a 401(k). Or at the very least, a husband with a real job and a 401(k)." Suzy also reveals plenty of interesting and unusual family secrets, including stories about her father's numerous wives.

Mommy Tried To Kill Me is poignant and Sorodonic (my combination of Soro and sardonic) by turns. When it gets too sad––as stories about elderly people who are injured and sinking into dementia must do, especially when they pick on the daughter who is doing her utmost to help out while freezing to death in Paris and trying to remember the French that has pretty much absented itself from her brain––you can count on Suzy to come up with a Sorokism (my combination of Soro, which means funny in some language other than French, and some sarcasm): "If parents want to hide something, they should attach it to their keys. They can never find those."

Mommy Tried To Kill Me: Why It's Never Too Early To Start Drinking In Paris earns The Janie Junebug Seal Of Highest Hilarical Tinged By Whimsy And Weirdness Approval.

You can purchase it on Amazon at https://goo.gl/zWy0Qy. You can also buy Suzy Soro's first book, Celebrity sTalker, on Amazon at https://goo.gl/9QgSvP, but you'll have to buy the Kindle version unless you want one of the four paperbacks they say are available for $59.99 and up. Or I'll consider selling my autographed copy of this hilarious book for about a million bucks. It's negotiable, but my rock-bottom price is $999,999.

Hey, you. Yeah, you, the person who read my post all the way to the end. The people who quit early are going to wonder where I am during April. Well, you are in the know if you read a tiny bit more. I don't blog during April because I leave the cruelest month to the A to Z-ers. I'm editing a book, and should have one or two more to work on soon. If you have a grammatical emergency or want to beg me to edit your book, please email me at dumpedfirstwife@gmail.com. I'll be back on blog patrol in May. Be there or be square.