I have a great novel for you––one that made me sigh with delight when I finished it. It's The Magician's Assistant by Ann Patchett. 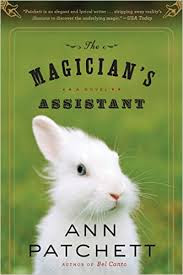 Pull a rabbit out of a hat? Parsifal and Sabine had far better tricks than that. The tape of their performance on The Tonight Show, hosted by Johnny Carson, proves their talent.

Now, though, the first words of the novel tell us

Parsifal is dead. That is the end of the story,

Of course, it's a beginning for his assistant and widow, Sabine, but she doesn't know it yet.

But when she reads Parsifal's will, Sabine learns that he left behind an illusion. His name and the story of his childhood are far different from what he told Sabine. Sabine leaves sunny Los Angeles for the harsh winter of Alliance, Nebraska, to find some magic of her own.

Ann Patchett conjures a story filled with her own tricks that inspire the reader to empathize with Sabine and the reality behind Parsifal's tricks.