THE CEPHALOPOD COFFEEHOUSE: IN THE MIDST OF LIFE BY JENNIFER WORTH

It's time for The Cephalopod Coffeehouse, hosted by The Armchair Squid. 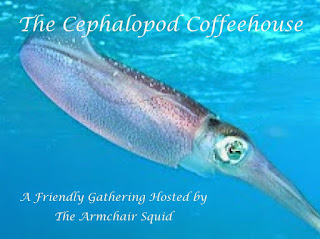 The idea is simple: On the last Friday of each month, post about the best book you've finished over the past month while visiting other bloggers doing the same.  In this way, we'll all have the opportunity to share our thoughts with other enthusiastic readers.

My book for October is In the Midst of Life by Jennifer Worth. Some of you might recall that Jennifer Worth was the nurse/midwife whose memoirs became the background for the popular show we in the U.S. can see on PBS: Call the Midwife.

In the Midst of Life is Worth's final book. As a midwife, Worth assisted mothers and babies at the beginning of life. Later, as a nurse and ward sister in various hospitals, Worth assisted many patients at the end of life. 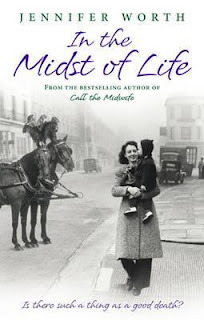 The focus of Worth's final book is one that's dear to my heart: that is, doctors and families interfere when patients approach death, instead of allowing for a natural death.

What Worth describes as "modern medicine" often prolongs life unnecessarily, and causes the dying untold suffering. She recalls her grandfather's natural death. The family did not call the doctor until her grandfather passed away--that outcome typical of the time period. He died in 1956.

How the world of medicine changed, as Worth documents in her descriptions of many cases:

A catheter was in place all the time, and this avoided incontinence of urine, which would have made the bedsores worse, but it had to be changed every few days, and kept clean, which was unpleasant and possibly embarrassing for Dr. Hyem. Unless we cleaned his mouth every two hours with glycerine, his tongue became so dry that the skin peeled off, and ribbons of grey, stringy stuff could be pulled from his throat.

The doctors saw none of this. Junior doctors sometimes get an idea of the suffering and humiliation that patients endure, and what nurses do, but a consultant seldom does. The more senior a doctor, the less he knows of the unpleasant details. . . .

I don't provide all of Worth's details regarding the patient's suffering, but as you can see from Worth's description, the man died, was resuscitated, and suffered horribly for several weeks, when the doctors finally allowed him to die.

I feel great sympathy for dying patients whose doctors or families won't "let go." At the nursing home, we cared for a woman who had cancer. Her pain increased daily. Her family wouldn't allow an increase in her pain medication because they didn't want her to be groggy and unable to communicate with them. She finally died one evening after an assistant brushed her filthy teeth, an act that probably dislodged bacteria that went to her heart and lungs to kill her.

In the Midst of Life earns The Janie Junebug Seal of Highest Approval. I ordered it from The Book Depository in London. You can order the book through Amazon, but they'll get it from a third-party seller. They don't have it in stock.

I wish you self-education and beneficial reading with Jennifer Worth's book. I also hope you join The Cephalopod Coffeehouse. Please visit The Armchair Squid to sign up.