Here's a once in a lifetime opportunity to read MOVIE WEEKEND on a Monday. With Thanksgiving and its long weekend about to arrive, I'm sure you need a movie the entire family can watch. 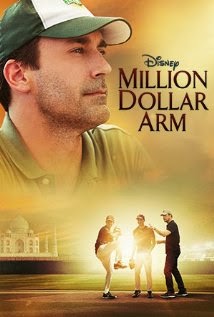 Million Dollar Arm is a pretty conventional Disney movie: nice story, a little suggestiveness but nothing graphic, opens the door to another country and way of life, a little romance, a family feeling among the characters, a learning experience.

J. B. Bernstein (Jon Hamm) is a sports agent who wants to make his own agency successful, but his deals fall apart at the last minute. His partner in failure is Aash (Aasif Mandvi). Aash is Indian, and he likes to watch cricket. It relaxes him. One evening J. B. is watching TV. He comes across Britain's Got Talent, and specifically, Susan Boyle's performance. He decides to hold a contest in India called "Million Dollar Arm" to find cricket players who can learn to be major league pitchers.

After a long, difficult search, he returns to Los Angeles with two young Indian men who are not cricket players, but he believes they have the potential to learn how to pitch. At first he's disappointed in their progress, but then he learns that he must be their family away from family and provide them with a home away from home.

I like the story. The screenplay and acting are fine. One aspect that bothered me is that Jon Hamm sounds as if he has a cold/sore throat throughout most of the movie. He's hoarse, but it's no big deal. The young men from India are pleasant enough actors.

The movie is fairly predictable, but sometimes predictable is good. Great Grandma can watch Million Dollar Arm with a kindergartner and not be upset or shocked. Some drinking goes on, and it becomes fairly clear (maybe not to children) that J. B. has a sexual relationship with multiple women before falling in love with a doctor played by Lake Bell.

Some of the comments on the Internet Movie Database complain that the movie is racist because the Indians are treated as stereotypes and made to be the butt of jokes. I felt that way a little bit, but some Indians on IMDb observed that much of India is not as developed as the U.S. and it's natural for the Indians to be surprised by many facets of American life.

I don't think the movie is racist, and I stand by my belief that it's an enjoyable story.

Million Dollar Arm earns The Janie Junebug Seal of Highest Approval. During a different week, it would be the seal of approval, but this is a time to present a movie that you can watch as a family. If you don't hang out with family on Thanksgiving, then I'm sure you can look at previous MOVIE WEEKEND posts and find something to watch.