I'm so glad I can present an appropriately titled movie that I like very much. It's Labor Day (2013, PG-13, Available On DVD). 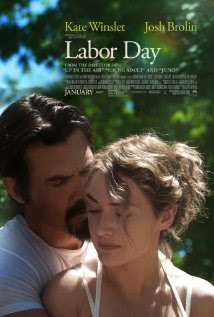 Adele (Kate Winslet) is depressed. Her husband left her because he couldn't stand to be around her sadness anymore (poor him). She lives alone with their son Henry (Gattlin Griffith), who I think is about twelve years old. Adele seldom leaves the house, but once a month she and Henry shop for supplies. During a shopping trip on the Thursday before Labor Day, a man approaches Henry, who is looking at comic books. Frank (Josh Brolin) requires assistance. He is wounded and bleeding some. With his hand on Henry's neck in a possessive manner, Frank insists on going home with Adele and Henry. Frank (Josh Brolin) has escaped from prison.

Is Frank a threat, or is he Adele and Henry's salvation?

I didn't know much about Labor Day. As I watched the opening credits and discovered it was based on a novel by Joyce Maynard, I took it as a good sign. I'll add the novel to my Amazon wish list because the screenplay is so good.

I'm impressed by Josh Brolin's performance because he's tender, yet frightening. He keeps the audience guessing about Frank's true intentions. He's also smoldering. I don't think I've seen him sexier, and I did not think Josh Brolin could be sexier. Kate Winslet is excellent, as always. Adele is needy, off-kilter, but strong enough to confront a challenge. I like a character that grows and changes, as Adele does.

I read on the Internet Movie Database that quite a few people don't like this movie because they think Adele is stupid and weak for doing as Frank tells her. Rather, I say she's confused and frightened, but willing to do what she thinks is necessary to protect Henry.

Labor Day earns The Janie Junebug Seal of Highest Approval with The Gold Star for Sexy and a Blue Ribbon for Poignant.

Please pardon my blogging absence of late. I wanted to read a particular book with particular care. I'll review this particular book tomorrow (Friday) for The Cephalapod Coffeehouse blogfest. Prepare for my review because this book makes my brain sizzle, kinda like when I stood in the puddle of water and touched the back of the leaking refrigerator, which you can read about HERE just in case you missed that particular adventure.

I have also been taking advantage of my Affordable Care Act health insurance (thank you, President Obama; I love you). I lost my colonoscopy virginity on Monday. I don't know why the preparatory drink is called Golytely when it should be called Goshityerbrainsout, but drinking the stuff and having a colonoscopy is better than finding blood in your poop and learning you have late stage colon cancer. I apologize for being so graphic. You really don't want colon cancer, though, and if you have it, it's better to find out as soon as possible. The colonoscopy itself was nothing. Apparently, I have quite the comely colon.