DO YOU REMEMBER KNIFE-PLEATED SKIRTS?

I've noticed knife pleats in some catalogs lately, so I guess they're in again. If you don't know what I'm talking about, then here's a photo to help you out: 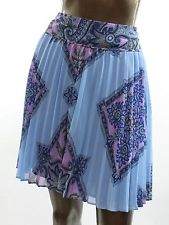 Does this give you some idea of what I mean? The skirt has very small pleats.

My knife-pleated skirt was a much fuller skirt than the one in the photo. It was also the skirt of an entire dress. It was very pretty. It was white because once upon a time I could wear white without getting a stain on my clothes within 30 seconds. It had a pattern of little blue flowers. I bought it in Gimbel's in Washington, D.C. I'm pretty sure Gimbel's went out of business about five minutes after I bought my adorable dress.

I returned to good old Topeka with my pretty dress from Gimbel's and wore it to work at Macy's. Macy's was downtown when cities still had department stores downtown. I was the switchboard operator in the Macy's office. This occurred during olden times when you could call a business and ACTUALLY SPEAK TO A PERSON AND GET SOME HELP. I know it's shocking. All of this stuff happened so long ago that I don't think you can even find it in a history book.

Lunch time rolled around and my pretty new dress and I strolled down the street toward a little sandwich shop with my friend and co-worker, Deeanna, who counted Mr. Macy's money in the vault. All of a sudden, a gust of wind blew up my skirt so my panties showed. People in cars gawked.

For a second, I felt embarrassed. But then I got over it because I realized I was no longer little Janie Junebug, switchboard operator at Macy's. I had been transformed into Marilyn Monroe in The Seven Year Itch. 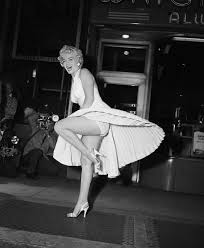 I wish people had had cell phones with cameras then because my white dress with the knife-pleated skirt and my cute little undies would have been all over the place on Facebook. Some people might have made videos for YouTube, but all that technology was so far off in the future that we didn't even consider the possibility that it would ever happen.

So, I'm sorry I don't have a photo of my Monroe moment. You'll just have to take my word for it that it happened.

Janie Junebug, who is back among the living
Posted by Janie Junebug at Monday, August 19, 2013