Today I present for your consideration a tragic and beautiful look at the life of Amy (2015, Rated R, Available on DVD). 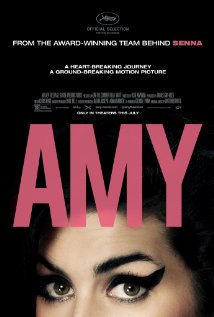 I'd heard of Amy Winehouse. I knew she was a successful singer who died young. That was pretty much it. Thank God Sam, the caretaker of my golden tresses, introduced me to Amy's amazing, soulful voice.

Now we have a documentary that uses footage of Amy, her family, friends, and demons, so we can see for ourselves at least a bit of who she was.

She's so beautiful she breaks my heart in two and stomps all over it.

I'm sad that life was too much for her. I'm angry that more than one celebrity belittled and joked about her on television. Jay Leno. George Lopez. Graham Norton. You people think you're funny making "jokes" about someone with a drug problem who's bulimic? Fuck you all.

A man would have your sympathy, but if it's a woman in trouble, then she's nothing but a mess.

Amy has The Janie Junebug Most Unusual And Especially Superior Seal of Approval. Amy has it, too.

This documentary is not for children. I would strongly consider watching it with teens, as long as you can use it to show them that she was a real person with real talent and real problems and that some people took advantage of her.

I watched Amy on a DVD from Netflix.

Sing for us, please, Amy.