DO YOU HAVE A FAVORITE MAD MEN CHARACTER?

To Roger . . . and Mona . . . and Joan . . . and Jane; Dick, the whore child; Pete . . . and Trudy; Henry . . . and Betty; Anna . . . and her cute niece who was preggers and homeless the last time we saw her; Adam; Diana; Rachel; Megan . . . and her friend who shared Don in California; Salvatore Romano; Ken Cosgrove; Sally, Bobby, and Gene; Harry Crane; Glen, the creepy kid who wanted a lock of Betty's hair; Bert Cooper . . . and Japanese art; Manolo . . . and Pete's mother; the secretary who drove the tractor around the office and ran over someone's foot so it had to be amputated . . . and you Mad Men watchers,

Here's another tribute to one of our favorite shows. The finale is on AMC at 10 p.m. Sunday, May 17, 2015. We've traveled with these characters from 1960 to 1970. They cried when President Kennedy was assassinated, changed their clothes with the times, learned to smoke pot, and watched Americans land on the moon. Many of their stories have parallels to my childhood. Yes, it's true. I learned to roll a joint when I was nine.

I promise: No spoilers.

If you're a Mad Men watcher, then I'd like to know which character is your favorite. Please share with us in the comments.

As for me, the top of the pops is 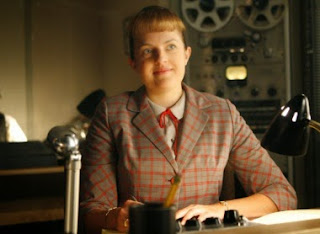 When we met Peggy, she was a secretary and a naive virgin with a terrible hair cut. Working as Don's secretary lasted longer than her virginity, but it wasn't too long before Peggy moved up in the advertising world.

I loved watching Peggy fight for her success. She's an emblem of the times, they are a-changin'.

Jon Hamm may be the star of Mad Men, but for me the show is really about the women--especially Elisabeth Moss as Peggy. Don Draper (Hamm) gave her a hand from time-to-time while she climbed the ladder, but it was Peggy who came up with a basket full of kisses. She was a natural all along.

Now, Peggy is an adult who shows great insight into some of the events in her life. The bangs, the pony tail, and the childish clothes are gone. I can't remember the last time Peggy visited her whiny mother. 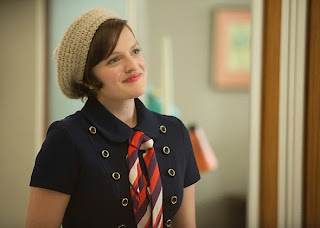 Brava, Peggy. I shan't forget you. 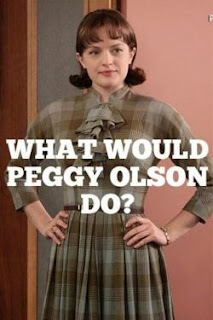