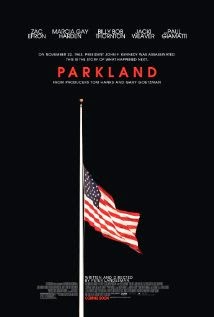 Many of you will recognize this name immediately because it's the hospital in Dallas where President Kennedy was taken after he was shot.

President and Mrs. Kennedy arrive in Dallas. Abraham Zapruder (Paul Giamatti) takes his place along the motorcade route with his motion picture camera, and then takes his place in history. Doris Nelson (Marcia Gay Harden) is a nurse at Parkland Hospital who remains calm while everyone around her, at first, is too shocked to take action. Robert Oswald (James Badge Dale) faces the shame of his brother Lee Harvey Oswald's actions. Their mother, Marguerite Oswald (Jacki Weaver), revels in the attention heaped on her family. A host of other well-known actors also appear in the movie, including Billy Bob Thornton, Zac Efron, Colin Hanks, and Jackie Earle Haley.

All of these characters come together to portray the assassination of a president on November 22, 1963. This movie isn't about conspiracy theories or solving crimes. It's about chaos.

I felt quite touched by Paul Giamatti's performance. Zapruder is reluctant to allow anyone to see the footage that depicts the actual shooting. Marcia Gay Harden is also quite good. She's the kind of take charge nurse I like.

I am a bit amused, however, by the disclaimer at the conclusion of the movie. From the Internet Database: Although based on a true story and depicting real-life people the end credits state: "All characters in this film are fictional and any resemblance to persons living or dead is purely coincidental."

Although we see President Kennedy in news footage from that day, an actor is credited as portraying the president. I guess the actor plays the corpse.

Parkland is not a brilliant movie, but it's interesting and moving. I don't think I'd show it to children––it would be too confusing for them––but I would definitely watch it with teens and be prepared to explain the action and to talk about the ubiquity of the question among multiple generations: Where were you when you found out President Kennedy had been shot?

Our companion documentary is JFK: One PM Central Standard Time (2013, TV-PG, Available On DVD and Netflix Streaming). Narrated by George Clooney, this show should be available from multiple outlets. 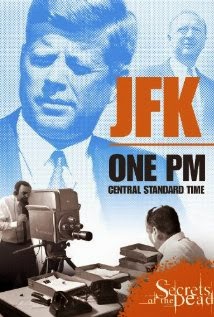 The photo representing this movie on Netflix says "PBS." The above photo, from the Internet Movie Database, states that it's part of the "Secrets of the Dead" series, which is on PBS. IMDb also notes the following: Shown in Britain on 22 November 2013 as a one-off special under the title "JFK - News of a Shooting" to commemorate the 50th anniversary of Kennedy's assassination. Whence it came, it's an interesting documentary that, similar to Parkland, is about chaos. But in this case, the chaos revolves around reporting what had occurred in Dallas, with a special focus on CBS News and Walter Cronkite.

The documentary is filled with fascinating details; i.e., Walter Cronkite had to make the initial TV report that the president had been shot from a radio booth because no camera was available in the newsroom. After the camera was obtained, it took about 30 minutes for it to warm up so Cronkite could go on the air. The show his report interrupted was As The World Turns.

Cronkite had been a wire service reporter. He absolutely would not report something unless it was confirmed by official sources. His behavior was so different from that of today's so-called television journalists and all their speculation. They seem to be hired, for the most part, for their affability and good looks, or sometimes their anger with the totality of humankind.

Thus, in spite of information coming in from reporters on the scene, including Dan Rather, Cronkite began his stint on the air by stating that three shots had been fired at the presidential motorcade (see news clip below). Cronkite gradually released more information as he received it.

Quite a few journalists who were in Dallas that day present their recollections. One woman (I'm sorry; I don't know her name) says the press car arrived at the hospital before the president's car. A Kennedy aide revealed immediately that President Kennedy was dead. (In Parkland, doctors discover a faint pulse that leads to a desperate attempt to resuscitate the president.)


At the news conference, the time of death is set at 1 p.m., although no one actually knew what time Kennedy "officially" died.

Again, I don't recommend this film for children, but if you are so inclined, then you should watch it with teens. You may be astonished by some of the details you learn.

I am tempted to watch Dead Poets Society this weekend, but I don't know if I'm ready for it yet.