The Hurricane has a new nickname -- Miss Conception. Every time I tell this anecdote I start to laugh so hard that my speech becomes incomprehensible, so if you have difficulty reading my writing, it's because I'm laughing so hard.

Miss Conception was listening to the president's victory speech, following the election, obviously. President Obama said that we want out children to grow up in an America that's "not threatened by the destructive power of a warming planet."

Miss Conception thought he said, "not threatened by the destructive power of a Mormon planet."

I thought that was hilarious.

The big news from Favorite Young Man and Little Chick is that President Jimmy Carter now lives with them. No, his wife didn't kick him out.

Actually, it would be pretty funny if she finally became so angry about his comment to "Playboy" so many years ago that he lusted after women in his heart that she said, Jimmy, Get the hell outa my bed. So he had to move in with FYM and LC.

However, President Jimmy Carter is, in fact, a stray cat who now makes his home with my animal loving children. 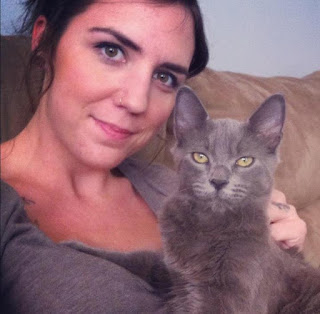 I think Little Chick and President Jimmy Carter make a beautiful couple. Fortunately, their dogs seem to find that having a president in their midst is not such a bad thing.

Reminder: Peaches Ledwidge in my bloghouse on Wednesday. She starts her blog tour here to promote the release of her memoir, Day Laughs, Night Cries. Don't miss out on this special appearance by Peaches!

And please click on my ads. If you keep it up, I might actually earn enough money to put a lump of coal in my Christmas stocking.