I present for your consideration a great documentary entitled Undefeated (2011, available on DVD -- would I see it if it weren't available on DVD? Not bloody well likely). 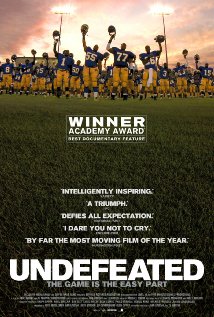 Undefeated won the Best Documentary Academy Award one year ago, and I'd say the film richly deserved the award.

The filmmakers followed the Manassas Tigers football team in Memphis for an entire season, managing somehow to disappear into the background and not interfere with interactions between coach Bill Courtney and his players.

During the season the film was made, Courtney was in his sixth year of volunteering as the team's coach. That's right. The man volunteered to coach the team. The school was so poor they couldn't even have a football team until Courtney, a business owner, stepped in to help. During Courtney's first two seasons as coach, the team traveled around, getting paid for practice games with other teams and getting their butts kicked. Then when the actual season started, they were exhausted and defeated. The Manassas Tigers didn't win a single game. Courtney ended the debilitating and denigrating practice games by encouraging other business people to donate the money so the school could have a team. He also recruited assistant coaches.

Courtney then encouraged a group of talented junior high students to attend Manassas and work with him. They did, and they developed as players and as men. Finally, during their senior year, they have an undefeated season and go to the playoffs.

I have absolutely no interest in football, but I found myself cheering for these kids. I certainly admire Courtney for volunteering, and I appreciate the sacrifices his wife and four children made so he could help so many young men living in poverty, and for the most part, without positive male role models in their lives.

This isn't a film to watch with young children because of the profanity, but I think you can watch it with kids 13 and older -- you know what your kids can handle better than I do. You might want to warn your teens I will wash out their mouths with soap if they repeat the language in this film, and then you can tell them what a naughty mouth I have and someone can threaten to wash out my cake hole.

I wish Undefeated had been around when Favorite Young Man was a teenager. It's so inspiring to see these kids succeed. The love between Bill Courtney and the young men he coaches is a beautiful thing to see. And getting a picture of the way the players live is an education.

One player has a chance of getting a football scholarship, but he needs to get his grades up and improve his ACT score. The coach wants to get a tutor for him. But the neighborhood in which he resides is so horrible that no tutor will go there.

But, don't worry. The coach solves the problem, just as he solves so many problems.

I cried tears of joy at least three times while watching Undefeated.

Dee, in spite of the profanity, I think you will love this film. A woman as tenderhearted as you are will be moved by the difficulties and the successes of the team.

I think quite a few of you will want to watch this documentary with your teens. Undefeated has The Janie Junebug Highest Seal of Approval.

I hope you all have a beautiful weekend.