TIP TUESDAY ON WEDNESDAY EVENING: TOO AND COMMAS

I want to see Green Day, too.

No comma for too in You are just too full of crap. 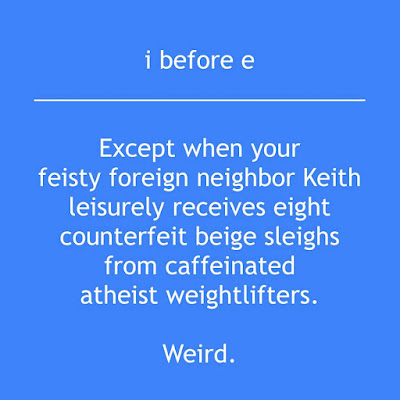 When I have new writing on my blog I usually post a link to it on Facebook. Facebook or something won't let me post the link now. I wonder if it has something to do with the struggle I went through last night to get rid of Messenger, which should probably have a nastier name. I somehow let Messenger take over and then I couldn't text. I got rid of Messenger, but now I can't post my link on Facebook. Weird.

User opted out of platform: The action attempted is disallowed, because the user has opted out of Facebook platform.

What have I done now to make the Facebook gods angry with me?
Posted by Janie Junebug at Wednesday, October 30, 2019 35 comments

I'm sorry I've been AWOL. I've had a lot going on that I'll share in future posts.

I'm happy to say that I'm sleeping better--most of the time. I combined your tips with suggestions I read online.

I've cut back on Diet Pepsi, especially after 6 p.m. I wash my sheets twice a week and like the white noise provided by a sputtering fan. I am learning to relax in bed instead of being upset that I can't sleep. I've even discovered that if I'm awake all night, it's not the end of the world. I accomplish a lot on sleepless nights.

I was afraid of going to work without sleep and then driving home at midnight. But I did it once and I wasn't at all tired and didn't feel sleepy while I was driving.

A yoga studio has opened near my house. They're going to offer private lessons sometime soon. When they do, I'm going to give it a try to see if I can do it. I think relaxing and stretching will be good for me. My biggest fear is that I'll get down on the floor and won't be able to get up.

Work is much better. I have a new manager. So far so good.

Some happy things are going on in my life (more to come). 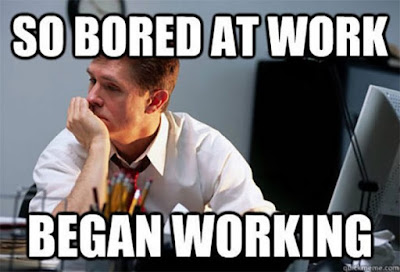 TO SLEEP, PERCHANCE TO DREAM

"To sleep, perchance to dream" is from Hamlet and actually refers to death and the hope for a dreamlike state without problems. I don't want to die. I want to sleep at night and stay awake during the day, but I thought the quotation worked. Does it? I can't think clearly.

My sleep problems keep getting worse. I couldn't sleep Saturday night. I made myself stay awake on Sunday. I was so sleepy.

So I went to bed about ten o'clock Sunday night, put on my C-PAP, and I lay there hour after hour, wide awake. I took off the C-Pap. Couldn't sleep. I finally decided to get up and read at about 4:30 a.m. Around 10:30 I fell asleep and didn't wake up until about 6 p.m.

So of course, I couldn't sleep last night (Monday). Here I am on Tuesday morning. What do I do? 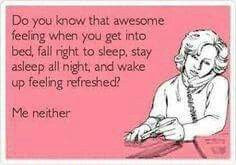 This sleep thing is causing a serious problem with my work. I've tried all sorts of things that I've read online. Don't sleep during the day. No caffeine after 6 p.m. Get some exercise. Practice good "sleep hygiene," which means having clean sheets and a comfortable bed and pillows, no internet or looking at your phone, use your bed for sleeping--not for reading or watching TV.  You name it and I've probably tried it.

Yes, I have a lot of worries, but I don't think they're keeping me awake. I don't know what's keeping me awake. My doctor knows I have this problem. The last time I saw her she became irritated with me, to put it nicely. She thinks I'm not doing what I should. Now I don't feel like going to see her.

I do have odd work hours. That gets in the way of regular sleep, but even if I'm off work for a while, I can't sleep at night.

After not sleeping for 24 hours or so, I feel pretty uncomfortable about going to work because I have to get home at midnight. What if I can't concentrate at work and screw up something important? What if I fall asleep while I'm driving? How do I stay alert enough to get through work and get home?

You probably have suggestions for me. I welcome your ideas, but please forgive me if I'm grouchy. I'm tired.

Update: I appreciate your sympathy and suggestions. You came up with some things that hadn't occurred to me or that I didn't read in all the articles about how to fall asleep. I'm ready to turn off the computer for the night, drink my milk, and read for a while or watch something relaxing on TV. I'm experiencing something right now, however, that really has me thinking. As soon as I looked at the time and thought about bedtime approaching, I felt the anxiety grab me--that clenching in my stomach and the thought that I'll get no sleep. I believe now that my anxiety plays a much bigger role in this problem than I thought it did when I wrote the post this morning.
Posted by Janie Junebug at Tuesday, October 08, 2019 46 comments

Everyone's favorite donkey, jenny_o, who claims she is a Procrastinating Donkey, said that paper is the theme for this week's Poetry Monday. I've never been good at writing a poem with a particular theme. My poetry shoots out of the top of my head, lands in pieces on the floor, and then has to be put together.

So I'm trying to remember if I've written a poem in the past that has something to do with paper. Let me take a gander at my old poetry posts. Don't go anywhere. I'll be right back. Probably.

Look at the photo of the cute donkeys while I'm gone: 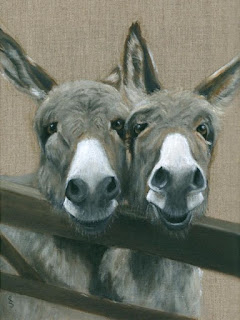 Okay. I'm back. I can't think of a poem that has anything to do with paper, and I looked at some of my older poems. Nothing about paper. Furthermore, I realized I've written some freaking weird poems.

No poem today, but visit Procrastinating Donkey. jenny_o will probably have a poem.

I'm writing this post on Sunday morning. It rained earlier and the temperature is only 81 at 10:35 a.m. I'm trying to stay awake so I'll sleep tonight. I get my days and nights mixed up. I told my nice neighbor across the street that I was born to run the streets at night. I'm a real wild child.

Willy Dunne Wooters suggested that I start using my blog as therapy, the way I did when I started blogging. It helped a lot then. I don't know if it will help now or if I'll just feel whiny.

I'll let you know how he is when I find out.

Nope! Can't think of a thing.

And I'm so sleepy. I have a long day of trying to stay awake ahead of me. Arrrrrrrgh, all I really wanna do is take a nap.

Oh! Something else happened that was weird. Sunday night--I think it was Sunday night or maybe Monday--I was spraying something with WD40. The can stopped spraying, but I knew it wasn't empty. I stuck a pin in the schnozzle in case it was clogged. Nothing happened and then all of a sudden it started spraying really hard and of course I had my face close to the can so I could see the schnozzle and it sprayed me in the eyes! Mostly my left eye.

It hurt. I might have cursed some. The can said if you get it in your eyes to flush them with water. So I did.

My eyes stung and watered a lot. But they got better the next day.

Ooooooooh, I'm so sleepy. My kingdom for a nap.

As soon as I find out about Willy Dunne Wooters, I'll let you know, and I'll tell you if I was able to stay awake all day. I want to give in and sleep, sleep, sleep . . . .

The Paper Caper--sounds as if it could be a good title for a mystery novel, but why would someone steal paper?

I think that Julie Andrews not being able to sing anymore is one of the saddest things in the world. I saw her on Broadway (second row seats) in Victor Victoria. She was wonderful.

It just occurred to me that maybe Willy Dunne Wooters made up the whole thing about the infection so he can sneak away from me.

I'm so sleepy that my mind is wandering all over the place.

Update: Willy Dunne Wooters is out of the hospital and resting at home.

Bildungsroman has been my favorite literary term for a long time.

I don't remember having a favorite before bildungsroman. I like other terms, too, but not as much. Synechdoche is awfully good. 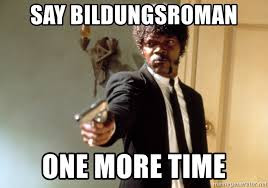 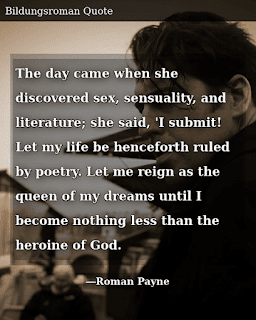 It's my favorite for two reasons, at least at the moment. I might think of more reasons later.

First reason: I like saying it. It rolls off the tongue with a lovely combination of consonants and vowels and sounds so mysterious.

Second reason: The best essay I wrote in college for my beloved Dr. C. was about A Portrait of the Artist As A Young Man by James Joyce, which is a bildungsroman. I also structured the essay as a bildungsroman. Dr. C. always spoke with us students before we began writing (I'm sure it averted many catastrophes). He liked to see an outline.

Fortunately, I was right. If I felt a bit better (I have an upset tummy), I'd dig out the essay from my files and share his comments on it with you. Sometimes when I'm sad I get out one of my old essays and read it. Dr. C's comments always make me feel better.

I got an A+. It was the beginning of a string of A pluses that lasted until I graduated.

Oh, my lovely Dr. C. He changed my life.

A Portrait of the Artist is in the #2 spot on my list of my favorite five. The Great Gatsby occupies first place. The Sound and The Fury is in third. It was also part of the late, great Faulkner's registered name. Officially, he was Faulkner of Sound and Fury. The dog of my life. 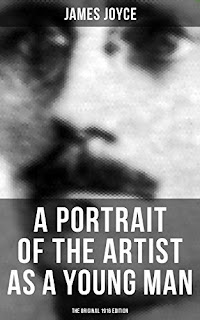 Some other examples of a bildungsroman include


Please tell us what your favorite bildungsroman is. 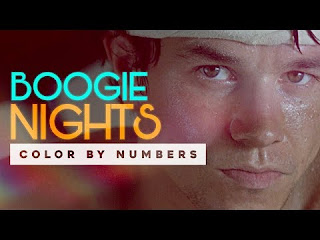 Two examples of a bildungsroman: could Boogie Nights and Anne of Green Gables be more different?