I have two very different movies for your consideration, and I like both of them. 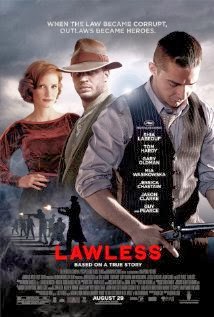 Based on a true story, Lawless is about the Bondurant boys of Franklin County, Virginia, and their bootlegging business with self-produced white lightning. Authorities seek bribes from the Bondurants during 1931. They refuse. Bloodshed ensues.

This movie, understandably, is pretty dark and has moments of violence that took me aback somewhat. However, it's also an interesting character study. Forrest and Howard Bondurant (Tom Hardy and Jason Clarke) are the tough guy, stoic mountain men, while youngest brother, Jack (Shia LeBeouf), tends to be weak and cowardly. But don't make the mistake of thinking that because these men are country bootleggers that they're stupid. It's also not about Good (the Bondurants) v. Bad (corrupt law enforcement). They're all bad guys, but the Bondurants make interesting bad guys.

The acting is great. We also have some romance with Jessica Chastain holding her own as Maggie. The plot is so interesting that it inspired me to learn more about the Bondurants. The movie is based on a novel by Matt Bondurant, Jack's grandson, called The Wettest County In The World . I'm very interested in reading the book, even though Matt Bondurant never interviewed his rather frightening Grandpa Jack about his exploits. I believe the novel includes a lot of family lore, and the movie is loosely based on the "facts", which don't seem to be known in this case. The Bondurant boys didn't keep diaries under their pillows.

Lawless earns The Janie Junebug Highest Seal of Approval. This movie is not for children. I'll leave it to you to decide if your teens should be allowed to watch. Lawless certainly portrays a very different time and place. I've been to some backwaters in Virginia. I felt as if I had left behind the rest of America.

And now for something completely completely different: Stuck In Love (2012, Rated R, Available on DVD and Netflix Screaming). 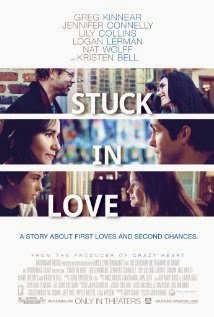 Bill Borgens (Greg Kinnear) is a formerly successful writer who hasn't written anything since his wife, Erica (Jennifer Connelly), left him three years ago for another man. He's so stuck in love that he still sets a place at the table for Erica on Thanksgiving, certain that she will return. He has enough money from his published works to spend his time trysting with a neighbor, spying on Erica -- he particularly enjoys it when she argues with his replacement -- and dealing with his two teenaged children, both of whom are becoming successful writers themselves. Rusty Borgens (Nat Wolff) continues to see his mother, while Samantha (Lily Collins) wants nothing to do with her. In fact, Samantha doesn't believe in love, though Rusty is willing to experiment with it.

Stuck In Love has a number of implausible points, and I don't care. I love a love story, especially one that includes authors and books. Greg Kinnear is quite amusing as he sneaks around his ex-wife's house, and she knows he's out there. Sometimes she watches him watch her. Rusty and Samantha have some very tender and poignant moments in their own relationships, as they learn about love. Best of all, we have a happy ending.

I watched this movie with Willy Dunne Wooters, and he loves it.

Stuck In Love earns The Janie Junebug Highest Seal of Approval. It's not for children. I think teens of about 15 and older can watch it, if you discuss it. The film includes casual sex and casual pot smoking (is there any other kind?).