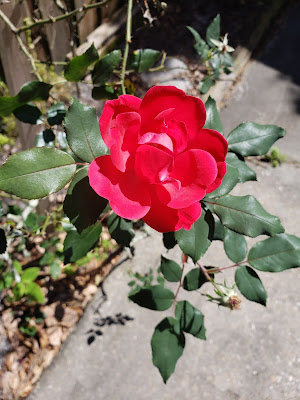 Inspired by those of you who garden and/or have houseplants, I acquired some new plants. They face great peril and possible death in their journey with me. Get ready because this post will be a long one with lots of photos and some questions. I welcome your plant care advice.

The two rose bushes were here when I bought the house. I don't have to do anything to them. They bloom frequently. 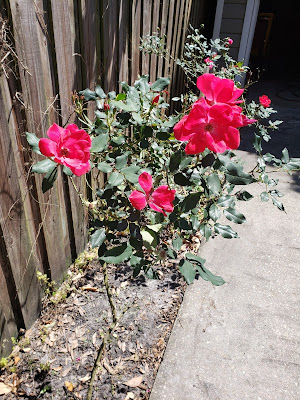 A week ago I made additions to the backyard. 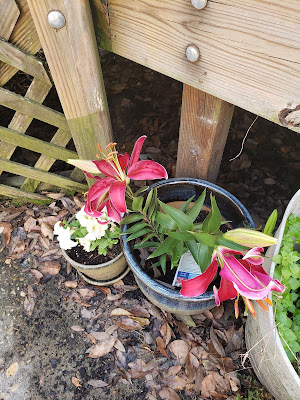 The petunias are cute. The lily is beautiful and gives off a great scent. I can smell it when I sit on the deck. I don't know if I gave the lily enough potting soil. It's not complaining so far.

If I do something different with the lily, then will it be happier? Should it be in a bigger pot? Would it like another lily next door for company or is it fine having petunias as a neighbor?

I didn't photograph two other additions that are next to the roses. I planted something I can't remember the name of, and also have some flowers described as DROP & GROW. So I dropped and  watered, but will they grow?

If the stuff I planted comes up, I'll let you know. I might take photos of the dropped flowers so you can tell me what to do to make them grow. They didn't want their picture taken a few days ago.

I don't know what else to add to the backyard. I'd like to have some raised beds à la Two Men And A Little Farm, but Lowe's doesn't seem to have pre-built raised beds and I am definitely not good at construction.

I also want to add some pretty flowers to the front of the house. What grows well in the shade? I have flower boxes under some of the windows, but don't know what to put in them. Maybe they should wait until I have new windows.

Next, I now have houseplants. They are all supposed to prefer indirect lighting. 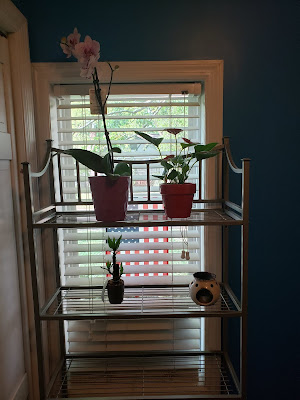 We begin with the orchid. 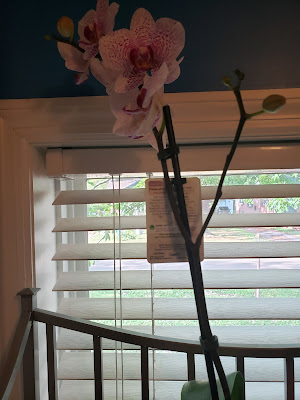 The pot it came in is a pretty lavender, but it's small. Should I re-pot it?

A plastic clip holds the orchid to the stick to give it good posture, but should I remove the clip and the stick?

Would it prefer living in the front yard? 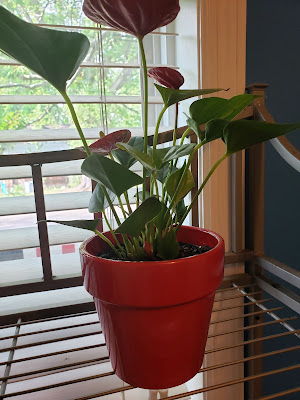 Next, meet anthurium. Its red flowers (are they flowers?) coordinate well with the red pot.

I'm not worried about it unless you tell me why I should be.

Finally, we have bamboo, which advertises itself as a good feng shui plant. 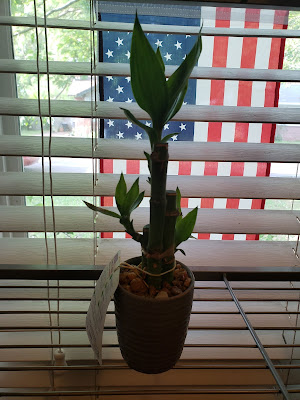 I'm sure I should repot the bamboo, but how big should its pot be for maximum happiness?

It came with pretty, decorative stones around it. Will I need to add more of those to a larger pot for its topmost pleasure? I can't imagine it would like plain gravel, but I don't want to pay for rocks, albeit attractive ones.

So many questions and concerns, yet I'm eager to bring more flowers into my life. I await your responses, Gentle Gardeners.