Last night I drove Favorite Young Man to a church. Then I headed toward home, taking the same route I use to get home from work. Familiar roads.

I was on I-95 North headed to I-10, where I get the exit to my hood. Heavy traffic but not bumper-to-bumper people sitting there. People driving really fast.

A couple of miles before I-10, the green Junebugmobile suddenly lost power. I was in the center lane. I managed to hit the emergency flashers. Pulled over to the right shoulder with drivers swerving around me and honking as if I dragged my ass and had my flashers on for fun.

Terrified, but I made it.

Texted Favorite Young Man that it was an emergency, but he had no way to get to me. An Uber wasn't going to drop him off on the interstate. Called Allstate Roadside Assistance, which I've had for many years. It was only my third call for help in eight or nine years. Excellent service from them in the past.

Gave my location. Explained the car was dead but it wasn't the battery. Car made chugging sound like the little engine that could when I turned the key. Probably the alternator. So I began the wait for the tow truck.

State trooper stopped and jumped the car. Didn't start. He said he was sorry he couldn't go to the church to pick up FYM. He had to deal with other cars that needed to be towed and would be back as soon as he could.

Tow truck driver calls and says he can't find me. I get a text from Allstate and send them my location on my phone. I see the map. My location according to the phone is correct.

Driver calls repeatedly and says he can't find me. I read what the nearest sign says and tell him the names of businesses I can see from the car. He wants me to take a picture of the sign and send it to him. I tell him I can't get out to take picture. I will get hit by a car. He says that if I won't send him a picture then he can't find me and he can't drive all over 95 looking for me. FUCK HIM. FUCK HIM AND THE HORSE HE RODE IN ON EXCEPT IT WAS A TOW TRUCK THAT NEVER ARRIVED.

I call Allstate. They get another tow truck company. Say they will "escalate" what happened with the first driver because he shouldn't have tried to force me to put myself in danger and he shouldn't have given up.

Second tow truck driver calls. He can't find me. I dial 911. I give my location. Within minutes a trooper arrives. How come he can find me but no tow truck driver can? I put the trooper on the phone with the driver. Trooper gives driver directions.

Driver says he's on his way. Second trooper arrives. Driver calls again. HE CAN'T FIND ME ON THE SIDE OF 95 APPROACHING 10 WITH TWO TROOPERS BEHIND ME FLASHING THEIR LIGHTS.

I get the trooper back on the phone with the driver. Gives driver same directions as before. This driver doesn't give up and he finally arrives. Gets his truck in place. Gets me out of the car safely. I go to get in the tow truck. Troopers still there, thank you God.

I step on the first step of the truck. So high off the ground. I get caught somehow as I'm headed for second step. I fall. I make sure I don't land on my back because a piece of bone is pointed at my spine from the time I broke my back in five places. If bone shifts could paralyze me. I'm falling and screaming for help. Trooper rescues me and helps me get in the truck.

Driver turns out to be nice guy. WOULD NOT GIVE UP UNTIL HE FOUND ME. Gets my car home and puts it in my driveway. Helps me get out of the truck. I give him 20 bucks to get a drink or whatever. I don't owe anything else because I'm a Roadside Assistance Member.

I get in the house. Take dogs out. Ice my bruises. Sob.

Can barely walk today but I'm alive. I'm not sure how long I was on the side of the road. Two hours? Three hours?

FYM gets off work at six and says he'll Uber here immediately.

I should have seen my doctor today or gone to urgent care but I don't have the strength to get dressed and have an Uber take me someplace.

As Penelope says, That is all.

Janie Junebug, who is frightened and hurt but will get better 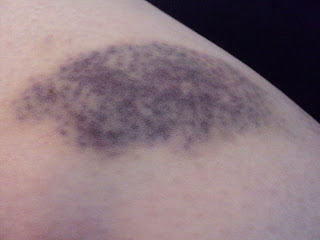 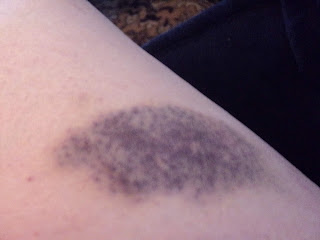 Why were people shot in California last night? Why are some of them dead? Guns don't kill people. People with guns kill people. Especially assault-style weapons.