Michael D'Agostino of A Life Examined hosts a bloghop called Flashback Friday––a time of the month when you can republish an old post of yours that maybe didn't get enough attention, or that you're really proud of, or you think is still relevant, etc. 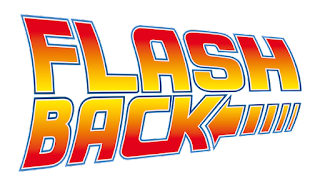 If you'd like to join us, Flashback Friday occurs on the last Friday of every month.

My Flashback Friday post for July is titled Fence Sitting Prohibited Here. I published it on February 3, 2010 (my third month of blogging). It has had eleven page views and received one comment. I want to publish it again as we approach another presidential election and the ensuing arguments, which always include abortion rights.

I confess I didn't think much of Sarah Palin, and I still don't. I wanted to be happy that McNasty had chosen a woman to be his running mate, but why did he have to choose an idiot who wears her hair so that her bangs are hanging in her eyes? (And don't go thinking I'm criticizing her looks just because she's a woman because you should hear what I have to say about former Illinois Governor Rod Bla . . . Blagoye . . . - sigh - what's his butt's hair.)

Sarah Palin was more experienced than then Senator Obama because she was the commander in chief of the Alaska National Guard? Puh - lease. And exactly how many times did she have to call out the Guard to deal with a natural catastrophe or face down rioters? She couldn't even make it through the remainder of her term in office as governor.

However, I admired one thing about Palin.

She did not sit on the fence when it came to abortion. She said that abortion was wrong and should not be allowed even in cases where the pregnancy resulted from rape or incest.

I don't agree with her, but she was right in taking a stand on one side or the other. Either abortion is murder or it's not. You can't say it's murder and then say it's o.k. in certain cases. Fence sitting prohibited here.

Now, I don't like abortion. I don't think anyone likes abortion and I hate it that abortion exists. BUT ABORTION MUST REMAIN LEGAL.

I'm amazed that I saw this on television when I was young, maybe 12 years old, and I know no one else was in the room, but a woman was on television talking about girls unbending coat hangers and using them inside themselves. I didn't know the word abortion; it wasn't a common topic of conversation then, but I knew what the woman was talking about, and I knew it was horrible.

I knew even as a 12 year old that no girl should feel so desperate that she scrapes her insides out with a coat hanger. Or goes to a butcher for an illegal abortion. No woman should hemorrhage, be left with scar tissue and unable to have children in the future, or even die, all because she could not obtain a safe, legal abortion.

Additionally, this decision should not be made for women by law-makers, the majority of whom are male. It should be a decision made by the woman, the baby's father (if possible), and a doctor.

The day a male senator or representative gets pregnant, then he can speak his mind about abortion all he wants.

But, I truly believe that if men got pregnant, then we would have abortion clinics on every street corner.

God bless you, Gentle Readers, and I pray you never have to face the decision to abort or not to abort, but as long as the decision must be made, let it be made with the knowledge that no coat hangers will be involved.